It’s a good thing that the 49ers Stadium Manager Jim Mercurio isn’t coaching the team on the field. Mercurio and his stadium operations crew are running the Stadium Authority’s budget into the ground. They’re supposed to manage the facility and make a profit for the City.

That’s lousy. It’s also suspicious. The year before in FY 2017/18 they made about $55 million and made a profit for the City of approximately $5 million.

This year, the 49ers let the City know a few months ago that there would be a huge drop in net revenue. Here’s a chart that shows revenue for the last five years.  This year, it wasn’t just a huge drop. It was a landslide. 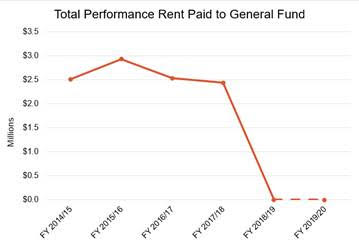 Some people who don’t know any better will say that the revenue drop was because of the weekday curfew for stadium events. But that law was in effect since the stadium opened. It’s not a recent change.

The weekday curfew was a compromise with a later weekend curfew. That way Northside residents can get sleep on school and work days. And concerts can play later on weekends.

Although the last time the issue came up, City Manager Deanna Santana let the Rolling Stones play later on a weekday without informing the Council. And the 49ers paid a reduced fine.

So where did the Stadium Authority money go?

Here’s the City staff’s explanation for the revenue loss:

— Operations, maintenance and related costs skyrocketed by $2.5 million which means that the 49ers charged the Stadium Authority more to lose more money.

— Only three non-NFL ticketed events made about $3.6 million, much less when compared to the losses.

— Non-NFL ticketed events lost $2.6 million in total in FY 2018/19 as the money-making events didn’t bring in enough revenue to offset the big money losers. In one example, had a second concert not been added at the last minute by the 49ers, net revenue would have increased $1.8 million for FY 2018/19.

Wow. Lots of mismanagement. Maybe Kyle Shanahan could manage the stadium and coach the team at the same time.

Last night, the 49ers asked the Stadium Authority to give the City Manager authority to authorize contracts for the RedBox Bowl on December 30, 2019 at Levi’s Stadium.

Well, they didn’t really ask because no one from the team showed up.

Councilwoman Debi Davis initially made a motion to “note and file” the request.  But Councilwoman Teresa O’Neill wanted to give Santana some authority to approve contracts because “there’s been some criticism of us that we’re trying to thwart them.”

Councilwoman Karen Hardy was skeptical about entering into contracts that would lose money. She said: “I teach math.” In response, Santana said that the 49ers request would mean spending $200,000 to lose $600,000 for the City.

But Councilman Raj Chahal agreed with O’Neill.  Chahal argued for spending and losing City money. He said he hoped it would be okay since he thinks it’ll be the last contract with the 49ers.

The Council voted 6-0 to give Santana authority to enter into contracts. But Mayor Lisa Gillmor said she didn’t think it would happen because the 49ers have too many conflicts of interest when it comes to the RedBox Bowl.

The 49ers have publicly stated that they “own” the RedBox Bowl. Here’s the Wikipedia link to one of their statements.

Interestingly, that link has been deleted.

And the 49ers now claim they don’t have conflicts of interest with the RedBox Bowl, according to City staff.

But the 49ers have a history of conflicts. Mercurio has had lots of financial conflicts of interest with stadium business, a story we initially broke.

This should be an interesting next couple of weeks before the bowl game.