49ers Fined by City for Violating Curfew — Again; But it’s Less Money and a Weaker Warning Letter Than Before

The Rolling Stones concert on August 18 was on a Sunday. That means it had to finish by 10 p.m. That’s the stadium’s weekday curfew. But the concert finished around 11 p.m. — an hour after the curfew.

The curfew is 11 p.m. for Friday and Saturday nights.

Here’s an excerpt from City Manager Deanna Santana’s letter that we got from the City: 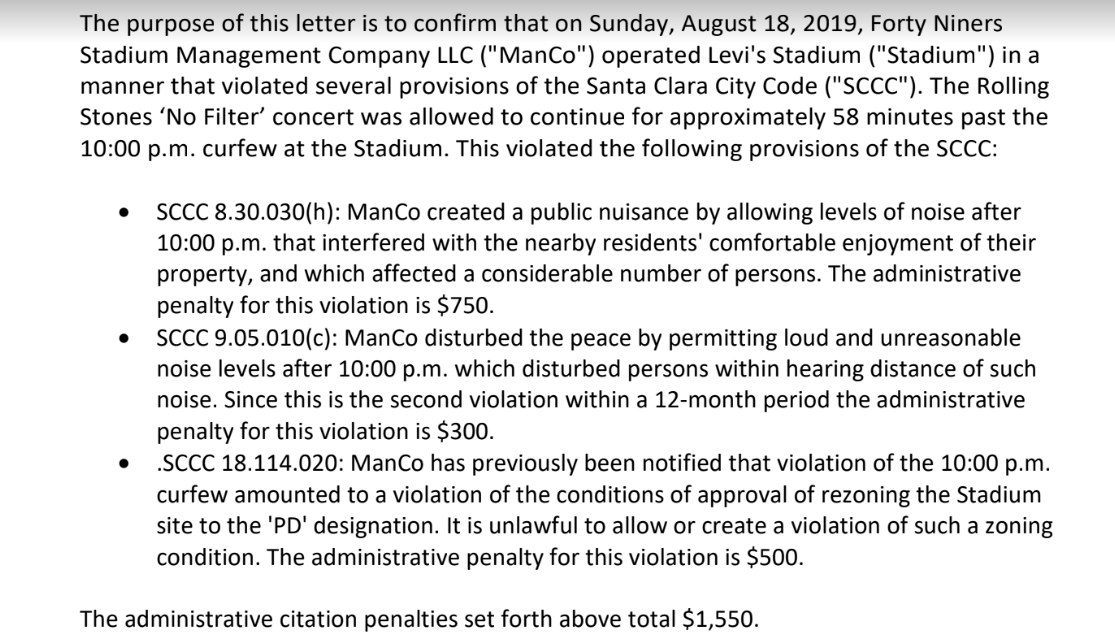 The fine was $1,550. That’s less than the $1,900 fine ManCo got the last time they violated the curfew. Coldplay blew by the curfew when they performed in 2017.

This year, Santana is not including any cost for the staff time dealing with this issue. In 2017, the cost was $2,755 for staff time and added on top of the fine.

There’s also some strong language missing from Santana’s letter this year that she used in the past. In 2017, Santana said that ManCo violated the law and the stadium management agreement.

That language is a pretty big deal. But there’s no mention of it this year.

There’s been a lot of confusion and communication problems around this issue.

The days after the Rolling Stones concert, city staff and media reports said that Santana gave the team permission to play past 10 p.m. Santana now says that’s not true.

We surveyed the entire City Council. Everyone except Vice Mayor Patty Mahan responded. We sent her multiple emails.

We learned that only Councilmembers Karen Hardy and Raj Chahal were told about the possibility of the Rolling Stones blowing by the curfew.

To add to the confusion, the City sent out a media advisory.

The City officially told the public that the event would end at 10 p.m.  Santana now says that advisory was a mistake.

We hope the City fixes its communication problems.

We also hope the City figures out a stronger way to enforce the curfew for the sake of the neighborhoods. The fine doesn’t work. The 49ers make a lot of money on concerts and paying a small fine isn’t going to stop them from blowing by the curfew regularly.