On Monday, Santa Clara police officers arrested Chris Stampolis for two felony counts. He allegedly threatened the life of a woman and hit her with his car. The incident happened in Morgan Hill exactly a year ago.

Stampolis, a former Santa Clara Unified School District Trustee was an Uber driver at the time of the incident.

Stampolis is out on supervised release and his own recognizance. He’s due back in court on February 4.

Jennifer Wadsworth of SanJoseInside.com has lots of details about the incident in a story she posted last night. She also talked to Stampolis who denies he did anything wrong. It’s a good read.

It’s interesting that the incident happened a year ago but Stampolis was only arrested this week. Here’s what Wadsworth reported on that:

Santa Clara PD Capt. Wahid Kazem said his agency only found out about the case a few days ago when a “citizen informant” tipped them off. His officers finally caught up to Stampolis in Sunnyvale for something that happened a year prior in Morgan Hill.

Stampolis did not have a good 2019.  Only a month after the Morgan Hill incident, Stampolis found himself in the middle of controversy — and on the ground —  in Imperial County.

He and his partner, Imperial County Board of Education Trustee Annette Gonzalez-Buttner objected to fellow trustee Mark Ramirez being selected President of the Board.

We wrote this story about that incident.

And this photo was tied for our 2019 photo of the year. 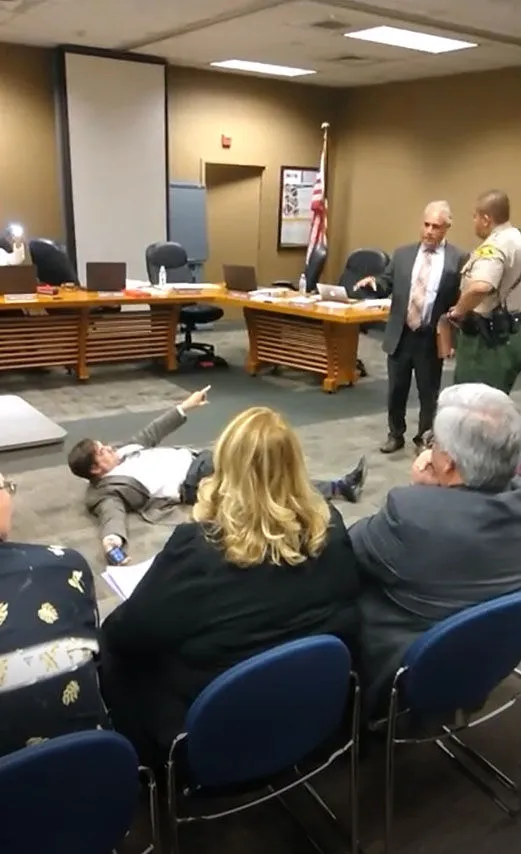 We’ll be following this story as it develops.

But we hope that 2020 is a better year for Stampolis, even if that means we have fewer stories to write. And pictures to share.