BREAKING: Group Starts Petition to Investigate Jed York and 49ers for Dark Money Spending for No on Measure C Campaign

So far, it’s not been a good month for 49ers owner Jed York. The 49ers lost the Super Bowl on February 2.

It’s gotten worse since then.

City Clerk Hosam Haggag sent him and other 49ers executives a warning letter that made them disclose that they were spending money in Santa Clara against Measure C.

They’re being investigated by the City for violating the Dark Money Ordinance. Whoops.

SUFSC successfully fought the 49ers’ effort to take over the Youth Soccer Park. They have a strong following in Santa Clara.

Here’s a link to the petition that’s on Change.org.

The team is spending over $300,000 to buy a Santa Clara city election — and they tried to do it anonymously. They hid the money until the City Clerk caught them. They’re opposing Measure C because they don’t want Santa Clarans to create council districts — a move that’ll make it harder for them to control the Council.

Please sign this petition to support investigations by state and local authorities that will uncover and stop the 49ers’ dark money spending in Santa Clara elections.

SUFSC also created a commercial that is making the rounds on social media. It’s pretty well done and funny (unless you’re  Jed York). Here’s the link. 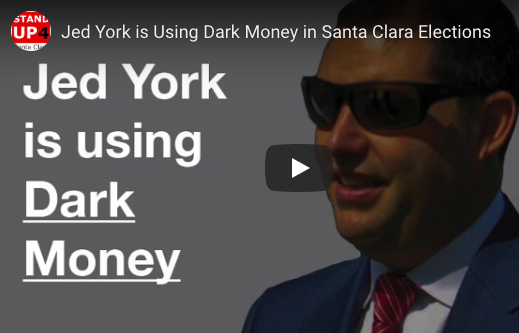 We haven’t seen the No on Measure C commercial. There’s no website for the campaign and the commercial is not on YouTube. That looks kind of suspicious. Maybe they need more than $300,000 to create a website.

But we’ve heard from residents who have seen the commercial. They say it’s confusing and looks amateurish.