The election to elect Santa Clara’s next Police Chief will happen in March 2020. It looks like Pat Nikolai is not only the frontrunner, he’s the only candidate.

We won’t know for sure until early December when the filing deadline for candidates closes. But the Santa Clara Police Officers Association has already started its campaign to help Nikolai. They endorsed him in mid-September.

Even though there’s no other announced candidate, the POA’s PAC is already running online ads for Nikolai. Multiple sources say they started seeing the ads in early November.

It looks like the POA PAC is serious about spending its money. We reported in September that they authorized spending $250,000. Wow.

Here’s what POA President Alex Torke had to say: “We consider Pat Nikolai’s candidacy for Police Chief to be absolutely critical as we work to improve our department and protect Santa Clara. We’ve committed resources now to educate voters in support of that goal.” 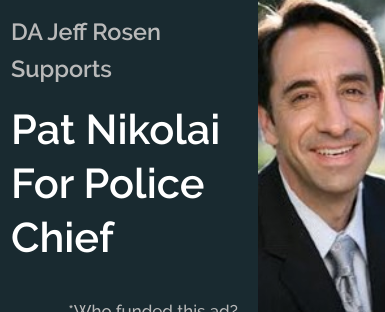 Nikolai announced an early endorsement from District Attorney Jeff Rosen. Here’s how one source put it: “Winter had no shot to win with endorsements from (Santa Clara Weekly Publisher/Lobbyist) Miles Barber, Patty Mahan and Raj Chahal when put up against Pat Nikolai, Jeff Rosen and Lisa Gillmor.”