Controversial billboard company All Vision got a city contract in 2015 to generate revenue from billboard advertising for the City. They’ve generated zero dollars.

Mahan also didn’t register as a lobbyist even though it was legally required. The City hired former Sunnyvale City Attorney Joan Borger to investigate. In September 2016, she concluded in a report that Mahan violated the lobbyist ordinance.

Mahan was the first person to have violated the lobbyist ordinance since it was put into place in January 2016. No one has violated it since.

But that’s not the end of the story. Now, All Vision is demanding the City pay them almost $500,000 for doing nothing. Huh?

All Vision’s General Counsel Robert Goldberg sent a letter to the City on January 17 that says the company terminated the contract and wants reimbursement for $498,079.  Are they saying: “you can’t fire me, I quit?”

But it looks like they quit on Santa Clara some time ago. All Vision let its business license expire in October 2019. It’s a requirement for all City vendors to have an active business license. 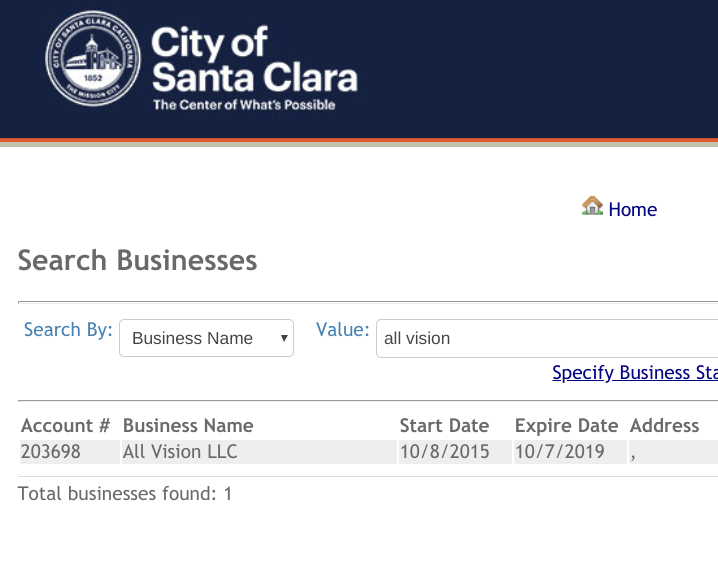 Goldberg’s “termination” letter is on the Council agenda. It includes a spreadsheet of their expenses. And it’s interesting.

Of the line-item expenses, almost 80 percent was paid to just two lobbyists: Kevin Moore and Ed McGovern. It looks like they got regular payments of $2,500 per month each to lobby.

Interestingly, there’s no line-item charge for Mahan even though she worked for them as a lobbyist and attorney in 2016.

There’s also no work product referenced in Goldberg’s letter. But All Vision never really did anything for the City so that’s not a surprise.

Last week, we asked Moore and McGovern to comment on what they actually did for All Vision or the City.  Neither one of them responded.

We’ll continue to follow this story and it develops.